How to Bump Start a Car

Cars aren’t always the most reliable machines and it always seems that they stop working when we need them most.

If you’re without any resources and need to get a broken-down car moving again, a bump start might be a helpful technique you can use.

How do you bump start a car, though? Bump starting is a name used to describe the method of pushing a manual car that can’t start, and it’s sometimes referred to as a push start, pop start, or popping the clutch.

By pushing the car, the engine is then forced to rotate and start, but it’s not always as straightforward or safe as it seems.

Bump starting is a practice that should be seen as a last resort but knowing how to do it safely is important in case you ever need to rely on it.

This bump-start car guide will show you the right way to do it, how it differs from other methods like jump starts, and the safety and legality issues behind it.

What Is A Bump Start? 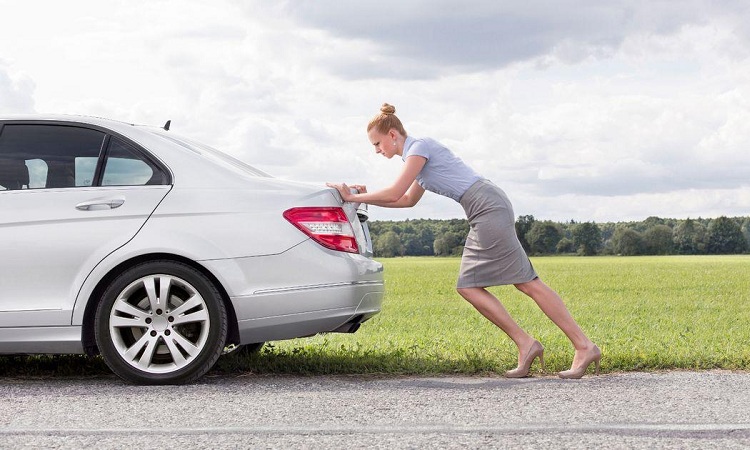 A bump start is a technique that can be used to get a car that has broken down due to a dead battery moving again, and it refers to the process of pushing it manually to do so.

As the car is pushed, the rotating wheels then push the engine to rotate which will fire it up and start it, if all goes well.

This technique can only be used in a car with a manual transmission and is sometimes referred to as popping the clutch or a push start.

To do it safely and correctly, you need at least two people, and it should only be attempted if you’ve tried all other methods, including a jump start.

The Difference Between Bump Start vs Jump Start 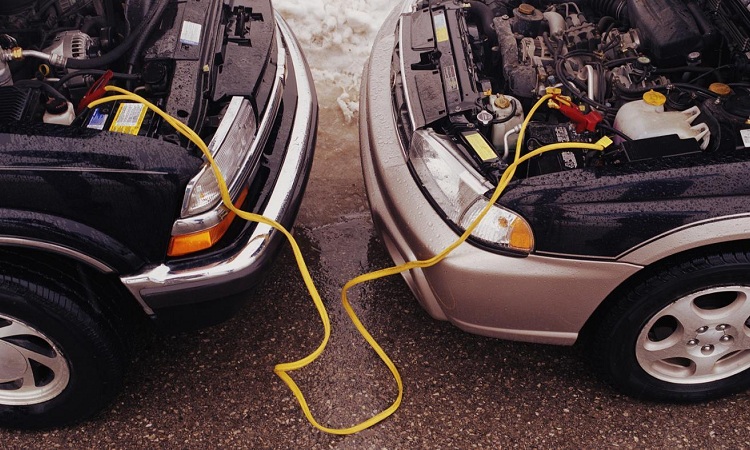 The most common method for starting a car with a dead battery is the jump start, which shouldn’t be confused with a bump start.

The key difference here is that a jump start requires another car to work, whereas the bump start only needs two people.

If you’re stuck with a dead battery, a jump start is the first and safest preference.

To jump-start a car, you need to attach a jumper cable from the dead battery of your car to the active battery of another car, but there’s a lot to be mindful of with this method as you’re working with electrical currents and battery power.

A bump start doesn’t require another car to work, and should only be attempted if you’re not able to do a jump start.

Both methods are capable of getting a car to start with a dead battery and can be used in most situations, so if you have an older car or want to be prepared for whatever could happen, learning each of them is important.

The Best Time to Use This Method 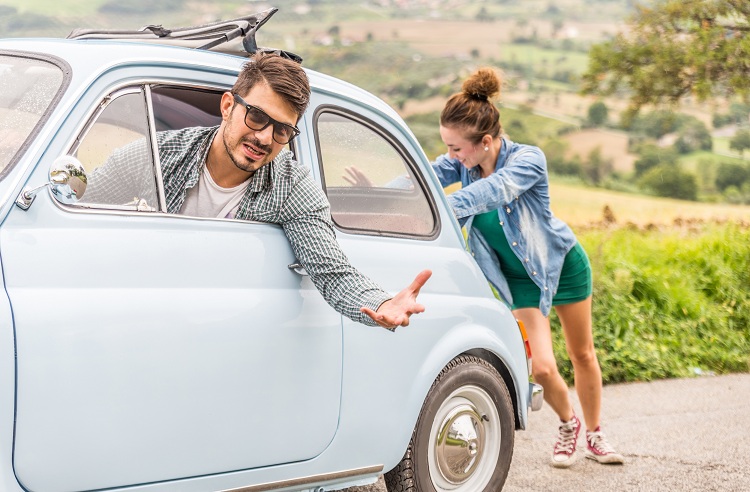 While it’s handy to learn how to bump-start your car, it’s not a method you should rely on, or ever hope to use.

The only time you’ll want to use this technique is if all other options are gone, and you’re not able to jump-start or have the battery replaced or charged by any other means.

The best way to tell if your car’s battery is dead is by attempting to start the car.

You might notice that the engine doesn’t turn over or that there’s a slower reaction than normal, and this is usually what occurs with a failed battery.

From there, you’ll want to turn off the key and remove it from the ignition, as leaving it there or leaving your lights on will steal the minimal power your battery does have left.

Make sure to turn off everything else from inside of the car, like the radio and headlights, so that when you go to bump start it, your car isn’t trying to power anything else up at the same time.

How to Bump Start a Car 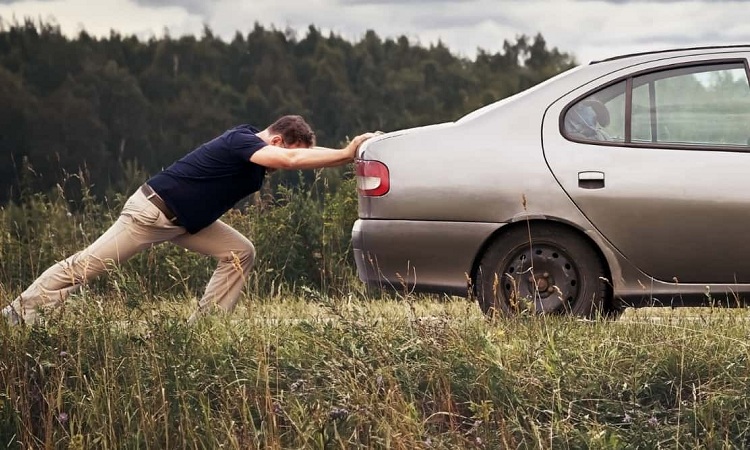 Although you hope to never rely on it, learning the right way to bump start a car could save you someday. Follow these steps to bump-start your manual car and get yourself moving once again:

Is It Safe and Legal? 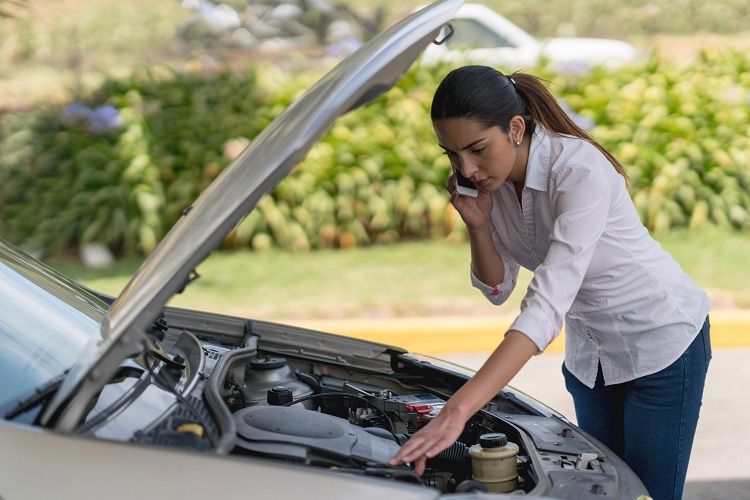 Bump starting a car can be performed safely in the right circumstances but it requires responsible thinking, teamwork, and fast action from everyone involved.

The weight of a car is enough to do some damage and when it’s running on its own without brakes or positioned on a slope, the risks are even greater.

You should never attempt to do this job by yourself, even if your car is on a slope and you think you can get in on time to start it, so don’t attempt to do it solo.

If something goes wrong, your car could become seriously damaged, and it can cause physical harm or even death for you and is simply not worth it.

In terms of the law, it’s perfectly legal to perform a bump start your car, but you need to follow the safety precautions and never attempt to do the job alone.

This is often the only method you can rely on when you’re stuck in the middle of nowhere and have a dead battery, so it’s important to learn how to get it right and do so responsibly.

A Bump to Get You Back on the Road

When all else fails and there’s no way to jump-start your vehicle, giving it a bump start is the next most viable option.

Although you hope to never have to rely on it, knowing the ins and outs of how to bump start safely is a helpful skill to have and will prevent you from getting stranded because of a simple dead battery.

Breaking down is never fun but it’s an inevitable part of car ownership that most of us will have to go through at some point in our lives.

A bump start can be a quick fix to a dead battery but there are other things you need to learn about the car’s battery that can help you out as well, so check out these FAQs to get a lesson.

Can A Battery Be Too Dead to Start? 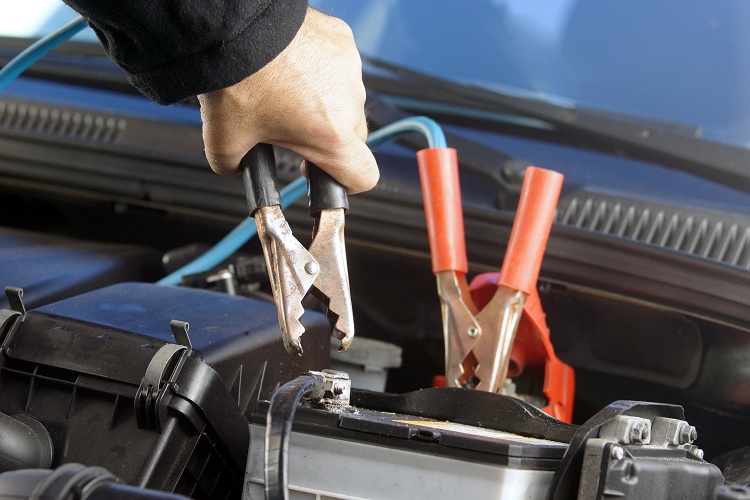 If the battery in your car has stopped, it’ll still retain enough energy to be started again even if it’s dead, and you can do this by either jump or bump starting it.

You’ll need to ensure you’re doing it safely though, so the best option is to use an active battery from another car to jump-start it.

Why Won’t My Car Start But Lights Come On?

When your car isn’t starting but the lights are still turning on, it’s likely because of a battery issue or a problem with the ignition.

The most common causes are a dead battery, battery failure, or poor connections from the battery to the car, all of which require the attention of a mechanic if you can’t rectify them yourself.

Can A Car Battery Stop While Driving?

If you’re concerned about your car’s battery dying while you drive, it’s a rare occurrence, as most modern batteries like cold car starting and dual-purpose batteries are designed to prevent this.

However, there may be cases where the battery dies while driving, and causes the car to stop entirely.