Engine Steam Cleaning: Harness the Power of Steam For Your Car

For centuries, steam has been used as a powerful cleaning agent in many applications, including clothing, skincare, and carpets.

With all of its cleaning might, it’s no wonder that some have even used it to clean their cars, with the trend of engine steam cleaning offering a lot of benefits worth considering.

What is engine steam cleaning, though? Steaming cleaning is a process where heated water produces vapours that are then sprayed into a car’s engine to clean it.

The introduction of this hot water and steam into an engine can remove the build-up of gunk and grease, as well as killing off any bacteria that’s housed inside without relying on harsh chemicals.

While steam cleaning your car’s engine isn’t a mainstream procedure that everyone has done at the mechanic, it can offer some benefits worth considering.

There are a few methods of steam cleaning an engine and both pros and cons to weigh up, so we’re here to explore what it’s all about so you can make sure you’re getting the most from it.

What is Engine Steam Cleaning? 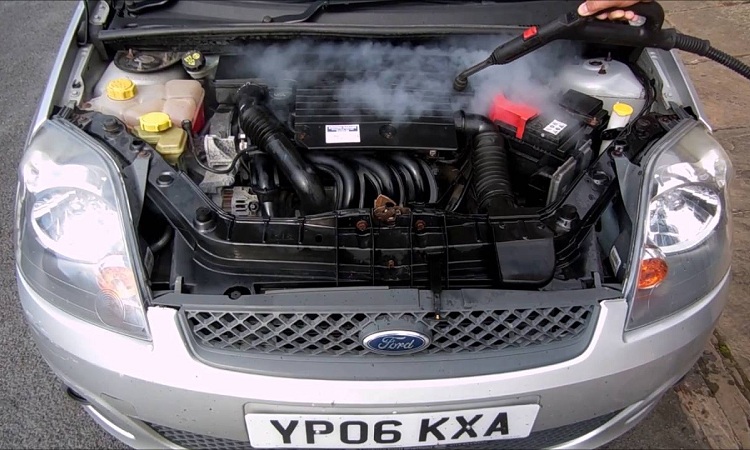 Steam has been used for centuries as a cleaning agent, and it occurs when water is heated past the boiling point to create vapours, which can then be applied to a surface to clean it.

This method can be used in a car’s engine to give it a thorough clean and without having to rely on harsh chemicals or elbow grease.

To clean a steam engine, you’ll need a dedicated pressurised steam cleaner with a nozzle that allows you to reach the engine bay and other parts.

A degreaser may be applied first to help loosen up the gunk and then the engine is sprayed with steam to remove grease and debris that’s built upon it.

Engine steam cleaning is a relatively new concept and its benefits and drawbacks are still debated, so it hasn’t yet become a mainstream procedure that people use.

The two options for getting it done including using a steamer at home or taking it to a technician to get the job done, and it’s recommended that you give your engine a clean like this every six months or so, depending on its use frequency.

Is It Safe to Steam Clean an Engine? 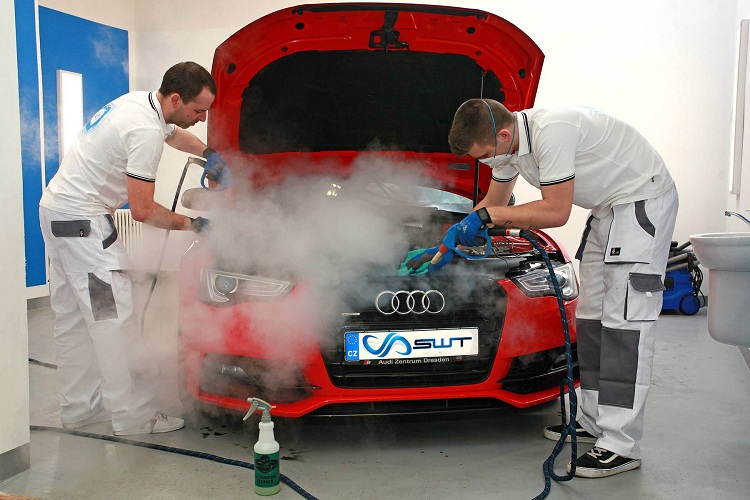 Steam has long been considered a safe and gentle method of cleaning, and the same goes when it’s applied to your car’s engine.

The modern car of today has a number of features in place that make it okay to spray these vapours around the engine, including weather-proofed connectors and housing for the more water-sensitive parts.

The engine bay where the steam cleaning is performed will receive a gentle but powerful cleaning using one of these machines.

It’s a safe way to remove things like oil and grease and can be used on the engine bay, the car’s motor, and drivetrains, and without worrying about the potential damage.

There are some safety precautions to take, including personal protective wear like gloves and goggles.

You’ll also want to make sure oil hasn’t leaked from the gaskets and turned into sludge in the engine bay, or that debris and leaves are still floating around under the hood, all of which need to be cleaned before you start steaming.

Finally, working with a cool engine is imperative for your safety and the protection of the car.

The Benefits of a Clean Engine 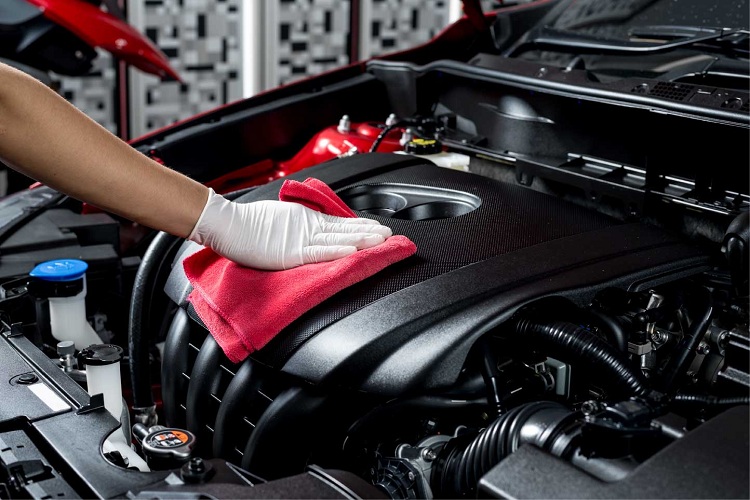 There are plenty of reasons why the engine steam cleaning trend has started to take off, and if you’re still on the fence about it, these are some of the strong points that might help sway you towards it. 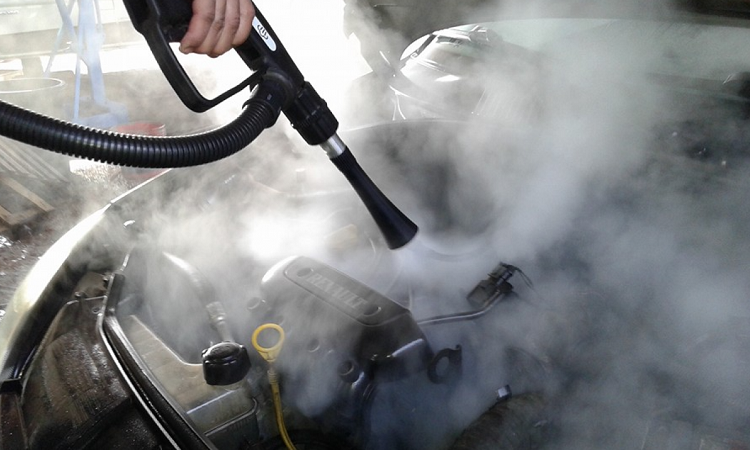 A responsible car owner weighs up the potential negatives before jumping in, and when you’re dealing with something as important as the engine, it’s imperative to see what could potentially go wrong with steam cleaning. 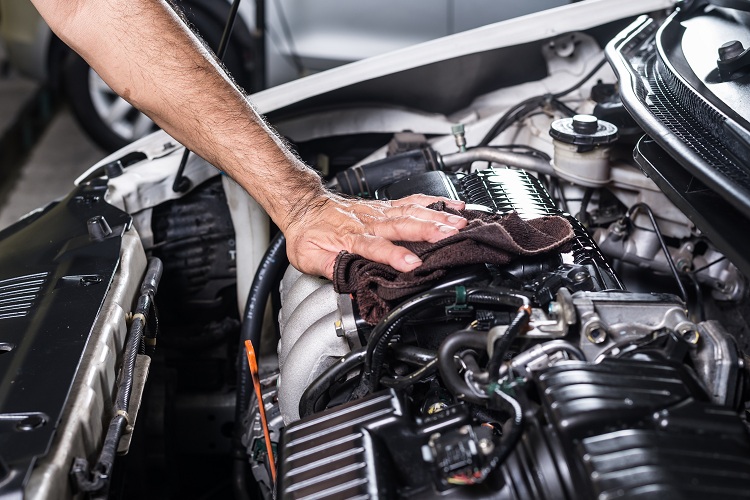 Steam cleaning an engine comes with some risks, so if you’re unsure about working with cars and don’t know your way around under the hood, it’s better to leave it to the professionals.

A professional engine cleaner will know the safe method and have access to commercial-grade steam cleaners, guaranteeing a better job.

However, if you prefer to do the job at home and want to make it part of your car’s regular maintenance, you’ll need to invest in a steam cleaner.

These are devices that heat the water inside of them and then shoot out pressurised steam from a nozzle, with varying degrees of force, so you’ll preferably want one that’s dedicated to auto detailing and engine cleaning.

If you’ve never steam cleaned an engine before, it’s a good idea to have a professional do it first, and once you’ve learned the basics, you can tackle it yourself.

However, make sure you’ve considered the pros and cons as well as alternative engine cleaning methods to see if it’s even right for your car.

The Power of a Steam Clean

Steam has been used as a natural and powerful cleaning agent for hundreds of years, and being able to harness these benefits in our car’s engines is a potential gamechanger.

However, like anything to do with your car, it’s worth having an expert perform the steam cleaning of your car’s engine and understanding the risks and rewards that are possible before you dive in.

Steam cleaning is just one way to clean an engine and depending on the state yours is in, there may be more that you need.

If you want to learn more about keeping your auto engine in good shape and the regular upkeep that’s required, read on to see some FAQs that can help you do just that.

Can You Wash Your Car Engine? 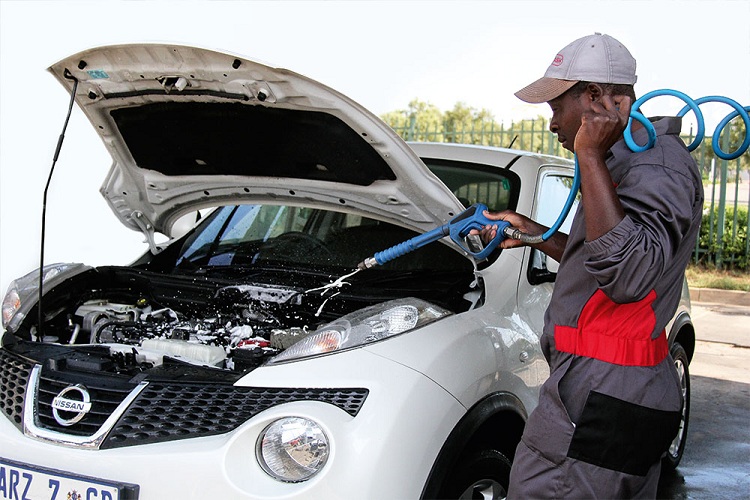 It is possible to wash a car engine if you know how to do so safely and using the right products, but some people prefer leaving it to a professional.

Within the engine, there are many delicate parts like wires and sensors that can become damaged when exposed to water, and although many modern cars now have them housed in an airbox or use weather-proof wiring connectors, it’s still risky.

How Can I Cool My Engine Down?

An overheated engine can cause problems for the rest of the car and if you need to cool it down fast, there are a few things you can try.

Turn off the air conditioner and turn on the heater to blow out the excess heat, and pull over to open the hood so that the cool air from outside can reach it.

How Hot does an Engine get?

A car engine that overheats is a safety risk to drive and will eventually stop working, with a temperature of around 110 degrees Celsius being classed as overheating.

If you continue to drive without letting it cool down and the engine’s temperature exceeds 120 degrees, there’s a chance that permanent damage will occur as the metal components of the engine will expand.